Steering the Aluminum Industry in the face of the Energy Transition

The post below was inspired by my participation at the ARABAL 2017 conference in Muscat, Oman to discuss the options for renewable energy integration in the aluminum industry. It addresses a seeming reluctance I encountered during the discussion to adopt RE with some initial considerations on how the industry can be transformed away from utilizing fossil inputs. It provides an overview of the industry’s products, scale and impacts, before discussing transition opportunities.

Aluminum: an Investment for both present and future?

Corrosion resistant when properly installed, malleable but strong and light, it is not surprising that aluminum is widely used. Globally, aluminum is the second most produced metal by mass after iron. Its historic production reached a peak in June 2017 at 175.5 thousand tonnes a day (approximately 60 million tonnes/year). Like all commodities, aluminum’s price fluctuates but has been growing since early 2016 from a low of $1500/tonne to above $2000/tonne in late 2017.

While aluminum is often used in what could be described as “frivolous” consumer applications, it also has central roles in durable goods. Its advantages make it ideal for mobile applications like lighter, fuel-efficient vehicles but also for frames, cladding and cabling. One interesting aspect of the industry is that the metal offers unlimited recycling possibilities without degradation. In fact more than 70% of the aluminum ever produced is estimated to remain in use today. From a transition perspective, this high recyclability can be considered as a long-term energy investment in the future availability of materials. Along the same lines, given aluminum’s resistance to oxidation, when used for applications like solar plant substructures it can remain in use for several panel generations allowing repowering of the installation.

Primary (non-recycled) aluminum is produced from bauxite, an ore containing it at high concentrations. It is mined in open cut, surface mines that imply comparatively low energy intensity. As an ore, it contains impurities (primarily silicates) that need to be removed in order for high purity aluminum oxide (Al2O3), alumina in industry parlance, to be made available for further use. The Bayer process for refining requires both electric and thermal energy inputs. First, it involves crushing, washing, and drying the ore. The resulting powder is then dissolved in caustic soda (NaOH) at temperatures ranging from 160-280 C depending on the ore type. Once dissolved, impurities are separated leaving a residue red mud. The alumina slurry is dried in calciners at temperatures >1000C to remove chemically bound water giving the final product the texture and appearance of hard sugar. The global average energy input to the process was 11.4 MJ/kg Al in 2016 of which only about 7.5% was electrical.

Smelting (see Fig 1) takes place literally in a pot – the industry’s term for electrolytic cell. Cells are electrically connected in series (the cathode of one to the anode of the next) forming a pot-line that can be anywhere from 100 to 400 cells. The cell container has an external steel structure and acts as the cathode. Alumina is dissolved into an electrolyte formed by a molten mixture of cryolite (Na3AlF6) and aluminum fluoride (AlF3). Being highly corrosive, it is able to dissolve alumina powder at less than 1000C which otherwise would require much higher temperatures to melt (>2000C). Alumina is poured continuously into the cell to maintain a concentration level of around 2-4%. Normal operating voltage for each cell is 4-4.5V inducing 300-800kA currents to electrolyze alumina into Al and O2. To reduce adverse magnetic field impacts and help with insulation, cells are aligned the pots on their longer side (see Fig. 2) leading to facilities more than a kilometer long and around 50-meter wide.


Perhaps the biggest complication of the process, is the reactivity of the molten cryolite - it can quickly corrode most known materials. It is contained by keeping it in balance with solid cryolite. Power and thermal management are critical. In the event of a power outage of more than a few hours (max four), the cells cools down and eventually solidify requiring a very expensive cleaning and restarting process that can last months. Excess power may melt the solid cryolite lining leading to uncontrolled leakage of the molten contents - a tap-out.

Finally, as alumina is reduced to Al concentrating on the cathode, the oxygen atoms quickly consume the carbon anodes to form CO2. An entire wing of the smelter is dedicated to continuously manufacture these carbon electrodes using low sulfur petroleum coke (pet-coke) as a raw input.

Like every transition process, renewable energy transition of the aluminum industry requires attention to its defining aspects: physical resources of energy and materials but also mental and social resources.

Smelter managers are understandably risk-averse. Two smelters in the MENA region recently suffered power outages, one due to a tap-out that melted the main bus bar, leading to significantly hobbled output for months. Stable, reliable, and cheap power is entrenched in their world-view and requires serious convincing and solid demonstrations of how alternative approaches would operate reliably. Nevertheless, no matter how high are the infrastructure capital expenditures - reaching above 1 billion USD for a modern refinery, the costs of its operation are equally high as we will see below and therefore there are clear economic reasons to consider both efficiency and lower energy costs.

To produce 1 kg of primary aluminum requires: 1.93 kg of Alumina from 4kg of bauxite, 0.4-0.5 kg of Carbon, 20 g AlF3, 50 g cryolite, and 12-16 kWh of electricity. In terms of carbon dioxide emissions and assuming that perfluorocarbon emissions are avoided or treated, this implies 1.65 kg of CO2 from the anodes. If an efficient combined cycle gas turbine (CCGT) plant is used to generate electricity using natural gas as fuel, the specific emissions of electricity would be around 400g/kWh or 5.2 kg of CO2. The contributions of mining and global shipping of the material in a bulk carrier are comparatively much smaller (see Fig. 3) and will not be discussed here.

Alternative technologies like direct reduction of alumina by melting in a solar furnace or ionic liquid electrolytes that would allow the electrolysis to take place at low temperatures are considered but far from commercialization. Considering the time-frame of the transition and sunk investments, the current aluminum production process will be the prevalent production system for the critical transition period of the next few decades.

Looking at the key components of the current Bayer and Hall-Héroult processes for aluminum production, the focal points for decarbonization in order of magnitude would be: (i) electricity input, (ii) thermal input for refining, (iii) substitution of the carbon anodes with inert ones. In order to achieve (i) and (ii) both efficiency and flexibility improvements would be helpful as the bulk scalable renewable energy will be coming from variable sources (solar and wind).

Practically, all smelters in the MENA sunbelt are auto-producers - i.e. they have their own captive power plants. Therefore, they are well suited to follow an incremental path to renewable energy adoption. We discuss how using the Sohar Aluminum plant as a case. The plant produced 377,000t in 2016 with an intensity of 13.7 kWh/kgAl - 590 MW average power consumption. It has a dedicated 1GW CCGT within 12km operating at 50% efficiency.

The building surface area of the Sohar plant is approximately 8 hectares (Fig. 5L). Installing roof-top PV (density 1.2 MW/ha) only provides 10MW –clearly insufficient. Ground-mounted, utility-scale plants are needed. The shaded strip to the North of Sohar (Fig. 5R) between the mountains and the coastline is 26000 hectares, flat and empty. It could host more than 13GW of installed PV, greater than the total installed capacity in the country (around 9GW). 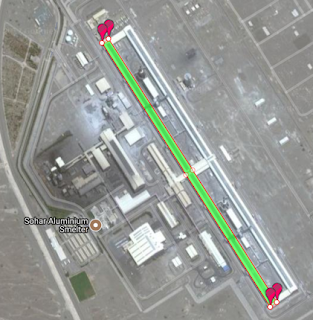 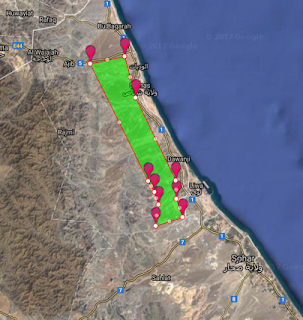 Renewable energy economics for a smelter with a captive CCGT are straight forward. The PV plant acts as a gas saver reducing the overall costs of energy. Assuming that the smelter acts as the off-taker guaranteeing a power-purchase agreement, for such a large-scale plant, it should be able to achieve at least $20/MWh given recent world-record bids. The plants could be bi-facial, single axis tracking allowing an increased capacity factor.

The financial benefits of off-setting natural gas use depends on its price. Alas, Oman does not have a clear market price for it. Oman exports LNG while it also imports gas from Qatar through the Dolphin pipeline and plans to build another pipeline to import gas from Iran. Oman uses NG for domestic needs including electricity, industry, and enhanced oil recovery and there are references of a shortage that anticipate stopping exports and diverting all gas to domestic uses by 2024. We infer that industries to date receive gas at subsidized prices but from a country perspective, there is an opportunity cost in offering these subsidies. Unsubsidized gas prices would range between $4 to $8 per MMBtu.

If a decision was made to completely transition the smelter operations to renewable energy, storage would be needed. The options for overnight operations would include pumped storage using sea water, large-scale batteries, but the most viable option currently would be to rely on CSP plants with thermal storage. Based on another world record, a PPA of 80$/MWh for energy delivered overnight seems achievable.

In any case, given that the solar peaks in daytime, the ability to modulate the refinery energy consumption and match the supply flux would be highly desirable. While conventional smelter-management thinking considers any type of power modulation as detrimental, a system that is possible to be retrofitted to existing smelters allows for exactly this. Known as Enpot and implemented already commercially at a Trimet smelter in Germany permits the modulation of refinery output and consequently power use by +-30%. The technology relies on surrounding the cells with a series of heat exchangers. This allows power (and alumina feed-rate) modulation as cell-heat removal rates can be varied by opening or closing the heat-exchangers.

The 2016 production of 377 thousand tons required 35 million mmBtu at an annual cost of $176 million assuming a gas cost of $5/mmBtu, or a specific energy cost of $467.5/ton of Al. We considered four RE options against current practice, shown in Table 1 and Fig 5. In Cases 1-3 the CCGT plant remains in operation. Case 1 operates the plant at constant output. Installing a single-axis PV system of 1GW capacity with a PPA of 20 $/MWh would reduce the energy costs by about 13.6%. Increasing the PV capacity to 1.5GW to utilize the variable production system decreases energy costs by 22% (Case 2) or 20% (Case 3) if output is equal to BAU while emissions are halved. Case 4 combines 1.5GW PV with 610MW CSP and 12-hour thermal storage for near zero emissions. This option expectedly results in a 40% higher cost system.


Summarizing, integrating large-scale solar PV generation in smelter operations in the sunbelt countries can provide unconditional economic benefits. This does not involve additional capital costs to the smelter assuming that an offtake PPA agreement is established with a build-own-operate (BOO) model for the solar plant. Incorporating output variability acts synergistically as it allows the smelter to leverage the peak insolation during daytime. Even more drastic emissions cuts to essentially carbon-zero can be achieved by incorporating a CSP plant with thermal storage for night operations. This would imply an increase in the electricity costs by about 40% at current prices and an additional 3800 ha of land. As other storage options become more competitive this calculus will change and it would reach cost parity once the cost of stored RE electricity drops below $50/MWh.
Posted by SS at 3:00 AM